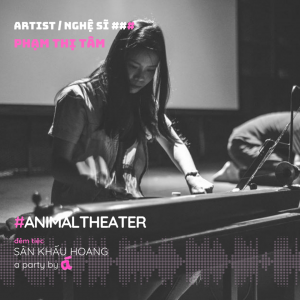 Tam Pham has completed a Bachelor of Musicology from the Vietnam National Institute of Music. Tam has participated in many different professional courses on improvisation, contemporary music and composition organized by the Domdom – The Hub For Experimental Music & Art. She was the founder of DomDom – Contemporary and experimental music club. The “Lost” – one of Tam’s improvisation music work, has been chosen to be presented in the Synthesis Album Vol. 1. This album has been implemented by the Urban Art Berlin by collecting sound works from female composers all over the world who professionally work in the sonic field. “Sadness with the sea” has been on the album Emergence which was released by Flaming Pines – the British label.

Her works seem to be a journey of exploring individuality in an attempt to connect with the surrounding social environment. She is trying to build a way of expressing in which composition and performance are two indivisible parts. She has also been participating actively in many different musical festivals in Vietnam and German.