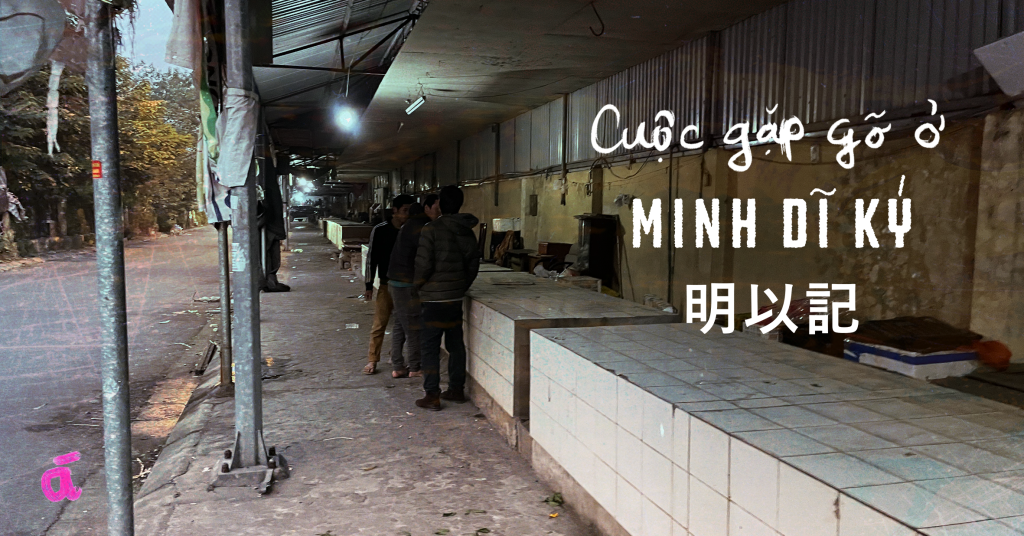 #Acknowledgements:
The play would not have been possible without the enthusiastic support, both mentally and physically, from Lê Thuận Uyên; the professional support from Mr. Trần Hậu Yên Thế on cultural, historical and Chinese aspects; reference books, supporting materials and analysis from Lê Tuấn Phi; a timely support from Ms. Đào Tú Khương from afar; and the dedication from Á team and friends.
#Program
Following the opening of Vũ Đức Toàn’s solo exhibition titled ‘Every Bilious Honeymoon’ (currently on view till Jan 15 2023), Á is pleased to invite you to the play titled ‘A rendezvous at 明以記 Minh Dĩ Ký’ with the participation of Nguyễn Phương Kiều Anh, Dương Phạm, Phan Phương, Trần Hậu Yên Thế, Đỗ Thúy Vân, Phạm Hải, Nguyễn Văn Thủy, Cao Hùng Mạnh, Đỗ Văn Hoàng, Nin, Vũ Đức Toàn, Nguyễn Huy An, Ngô Thành Bắc, Nguyễn Song, Vũ Quang Minh, Cấn Văn Ân, Phương Tiện, Nguyễn Đình Phương.
The play is set on a day in December (lunar calendar) at Minh Dĩ Ký (已明基), which is regarded as one of the four “pillars” of cafés in Hanoi in the last century (Nhân – Nhĩ – Dĩ – Giảng). The play takes inspiration from a true story written in Trần Đĩnh’s memoir ‘Đèn Cù’ (Volume II, Chapter 34) about the rendezvous between a writer from the Department of Agriculture and a woman well-versed in astrology, also an adopted daughter of the former Governor-General of French Indochina.
Those who are at the café communicate in a strange manner, as if they are in an unanimous silence, even when they talk or laugh. A regular customer of the café whispers jokingly that they were taking turns to keep a candle burning, especially in such a weather. December (lunar calendar) is a month when there are a lot of frictional winds, or people would call them invisible winds, which are very likely to cause illnesses. Such winds are not strong enough to see, but they are harmful enough to damage the spiritual well-being and other species. Hence, during such times, people are often more careful with the decorations, family heirlooms, and adornments, as they would, often out of a sudden, be broken or cracked. In December (lunar calendar), the elderly, children, and pets are also often wronged for nothing, to be blamed for or glared at. Speaking about the coffee at Dĩ, it is definitely something completely different from that of Nhân, Nhĩ, and Giảng; whether its taste is good or bad, you will need to try it out.
Notes:
– Trần Áng is the pen name of the writer and journalist Trần Đĩnh, also the author of a two-volume memoir titled ‘Đèn Cù’.
– Hoàng Thị Thế is the daughter of Hoàng Hoa Thám. After the being escorted to France, she was adopted by the former Governor-General of French Indochina, Paul Doumer. He later became the President of France and was assassinated by a close range shotgun and died in the arms of Hoàng Thị Thế. After many years, she was able to return to Vietnam and lived in both Hanoi and Yên Thế (Bắc Giang province).
– Other characters featured in the play: regular customers of the café, staffs of the café, visitors and those who are undetermined to be either staffs or visitors.
– More information on ‘Every Bilious Honeymoon’: https://aea.space/event/moi-tuan-trang-vo-mat/