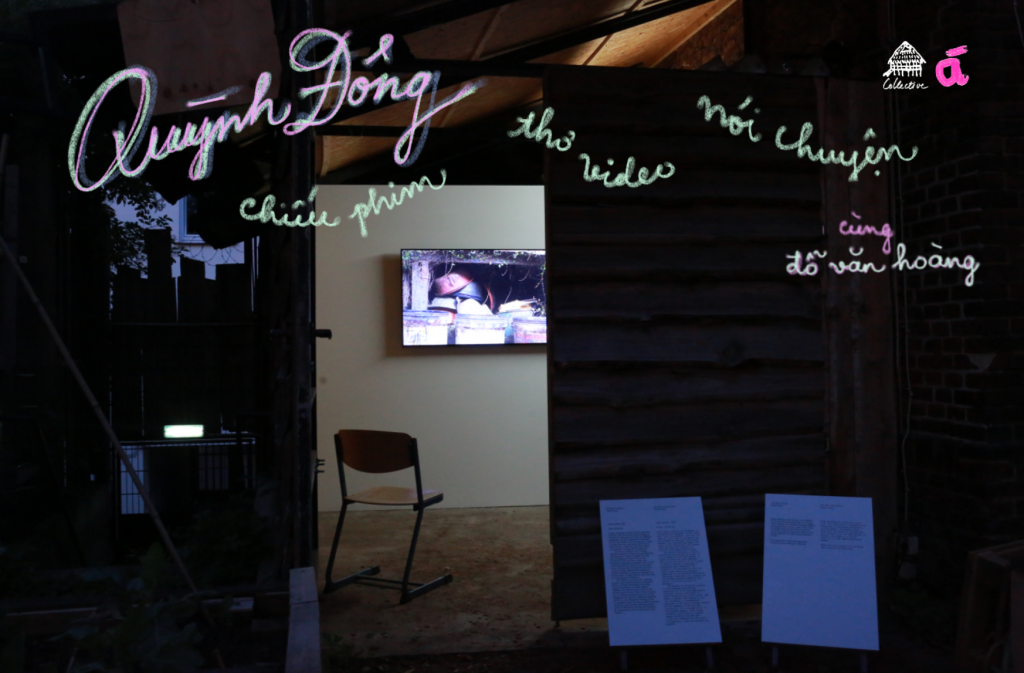 #About the artists:
Quỳnh Đông was born in 1982 in Hải Phòng. She lives and works in Zurich, Switzerland. Through performance art, she likes to tell stories made from fragments of different cultures. She works with the body as an object and a canvas to interprete all things possible.
Đỗ Văn Hoàng, 1987, with a background of Theatre and Cinema, working as a freelance.
#Program
Nhà Sàn Collective and Á Space are pleased to invite you to the screening of Quỳnh Đông’s films and poem video and discussion moderated by our guest Đỗ Văn Hoàng.
Dozens of poems, dozens of still lifes, which can be considered video shots from the studios of Nhà Sàn Collective’s members.Apparently no ID photo are needed to visualize their portraits. Each still life is a realist painting of each member’s portrait. This is what Quỳnh Đông’s most recent work, ‘Poem Garden’ (2022), is about. The work was recently shown at documenta 15 as part of Nhà Sàn Collective’s ‘Bến (Harbour)’ project.
A good opportunity to ask Quỳnh Dong why this time there is an absence of herself that is often staged by Quỳnh Đông in many other works. In her statement, she also mentioned Andy Warhol, who was obsessed with portraying items of everyday life in his work. For those who have loved her work, one must also be obsessed with the “bolero” melodies and many a time, her appearance edited in a hand-crafted “clone” technique, so much like in an early Chinese “action” movies.
In this intimate event, Quỳnh Đông will screen several of her works including ‘Poem Garden’, as well as share about her practice with the facilitation of Đỗ Văn Hoàng.